some pics for a game i’m working on…

gotta have dice because its important for the player to understand their fate is at the whim of cruel, capricious forces beyond themselves

END_OF_DOCUMENT_TOKEN_TO_BE_REPLACED

your friend played this game. he helped you beat the parts you couldn’t beat. but he’s gone now. you’re at his house as the rain beats down and the living room smells like wet wood and carpet uncleaned since you were kids. Dim light cuts the room in half, the rest shadow from which you deliver his old CDs and cartridges into a cardboard box because his parents said do whatever with his stuff, wouldn’t understand what they were looking at, what it means to a kid. Xrafstar Killers for the PSP, the scratched, smeared disc so light in your hands like it couldn’t possibly contain that deep, dark, beautiful world you stumbled through, grabbing the console back, trying to impress him, plastic sticky from shared sweat.

you break the disc in the kitchen and pick up the biggest shard. you’re running out of things to believe in. you cut yourself in the lines you learned before that post was deleted for violating the community code of conduct. this world is the false one. the dream is real. the post warned that every captive world has become hell in the absence of the hearts of children. that tyrants have taken control. that you should think twice about entering a place where death is torture’s blink. where you can’t shut it off if it becomes too much, a razor-lined wheel of reincarnation. it doesn’t matter. you’ll see him again, in whatever form you fit inside, in the world of Xrafstar Killers. To never be alone.

The surgical markings are a type of rash that appears inside the national park.
The rash derives from contact with urushiol-X. If the rash is not treated, those parts are changed.

There is also an artifact sharpie which can draw them directly. Another of the “cylindrical quotidian” artifact line of everyday objects categorized by INNOCENT. As usual, those objects are related to an oily substance.

The thorn forest is full of nerve poison. This and many other national park irritants can act as a backroute for urushiol-X “real driving”. With enough exposure to urushiol-X your system starts endogenously producing it as a response to any negative stimuli; phantom rashes.

The national park can be navigated via desire paths. Upon appearing in the park, an initial “desire maze” or “game trail” is manifested from the combined neural circuitry of the trapped bipeds, usually from the anal-territorial circuit. Through time-binding, bipeds can create a “knot” in the maze to which they can return and sleep with minimal danger. If desire is 100% paths can even be manifested immediately, even through refrigerators and people. Without desire the national park contracts around intruders. This is why people with extreme overt or latent desire tend to survive the longest.

more of this guy
algal bloom diving is low visibility but the cenotes of the archipelago are one of the best shortcuts and also evade cameras (moisture against surveillance).
your diving gas mixture is very personal. an equation of narcosis and oral ease. but your tank is exposed.

low kill shelter is a lowkey palette cleanser between works. calibrating people down so they can get fucked up more by my next stuff. i usually start from really strong worldbuilding but here i’m using the most basic mundane concepts and finding what’s interesting in them
which makes sense if you know its basically set in Emeryville
such a scary dead clean place, def my top creepypasta location in no cal
anyways gotta save room for the scorpion layer cake. desensitization management etc
it’s the first thing i put on kindle in addition to itchio. i got about 3x the sales on itchio which i attribute to 1) that being my main store for awhile and 2) amazon sucks and i dont blame people lol. But this was a good low-stakes experiment that helped me figure out how to put stuff on kindle which will be useful when the novel comes out.
i like writing romantic elements. i like making people feel that way.
i suck at promoting stuff so i was happy people i’d never met left a bunch of reviews on twitter, and some on itchio/amazon/goodreads.
thanks for the nice words and encouragement.

interesting dream because i remembered an unusual amount of dialog
instead of it getting scrambled in transition
even remembering a single word is usually a big deal
obviously i had to “fill in” some parts but a lot is verbatim or the closest translation, and all the events happened like that
lynchian feel

made a charitysona generator
was really fun to make the layers, compulsively adding new things and seeing how they look together

comic followed by a game

in other news your lady on the front lines of cali yuga is praying she doesn’t get burnt up by giga-fire. generous thanatoidal coils strangle the false country, forcing people into transfiguration. past present and future is formless and hazy. maintaining holding pattern… 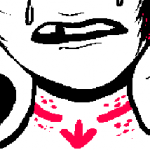